How Social Media Accidentally Got Me Elected

The great thing about social media is that it enables things to happen that were never before possible. Crazy things. Absolutely ridiculous, go find a straight-jacket, he’s off his rocker type things. Things like accidentally getting elected – for free.

Yes. You read that correctly, accidentally getting elected.

Listen, my children, and you shall hear of the Facebook election of me…

Early on the morning of November 8th I was sitting at a local precinct handing out campaign literature for a state senate candidate that just happened to be a client. (That’s right, we weren’t just dedicated, we were COMMITTED.) In case you were wondering, handing out campaign literature wasn’t in the contract, but we don’t mind going above and beyond what’s expected of us.

I was standing there sipping my coffee and trying not to freeze when my phone rang. It was a friend of mine.

“I just voted for you,” the voice on the other end said.

“I just wrote you in for the Soil & Water Conservation Board,” was the reply.

“Why would you do a thing like that?!” I said back.

“Well, you get two votes and there’s only one name on the ballot,” said my friend.

I did some quick math in my head. I’ve always loved the outdoors. My grandpa took me fishing for the first time when I was three. I was hooked. I hunt, fish, hike, camp, climb and kayak. Love affair probably doesn’t quite cut it. Obsessed might be a better description. I’ve been involved in politics for quite some time now. Not because I like it, but because it’s a necessary evil. I actually hate politics. However, as long as there are people bent on taking our liberties, I’ll be required to fight against them – mostly because I enjoy being free.

“Thank-you sir, I appreciate your support of my candidacy,” I replied.

We laughed. Here I was trying to get a friend and a client elected to the state senate and I found myself accidentally running for office too.

Was I crazy to even attempt such a thing? Yes. But somebody had to win.

Would that somebody be me? Time would tell.

I didn’t know it at the time, but no one had ever won by write in in my city as far back as the registrar’s office had records for.

Yes. I was out of my mind for even thinking this would be doable.

Back to the task at hand, a friend came up that I knew was supporting my client. I asked him to vote for me. He said he would. I said thank-you.

1 vote down. Time to get some more.

I flipped open my phone and put a post up on my Facebook page asking people to write me in for the Soil & Water spot. It was 8:36am.

Around noon I went to another precinct. I relieved my friend’s wife from the task of handing it out for my client and asked her to vote for me. She said she would. I had a great time laughing and joking with the lady there that was handing out info for my client’s opponent. She asked me if I was really running for the Soil & Water board. I laughed and said yes. She replied, “You know, I like you. I’m voting for you!”

I replied, “Fantastic, that means I have a broad base of support from all across the district! Thank-you for your support.”

We laughed again. It was absurd. We knew it. It was 100% entirely enjoyable. Sometimes politics is too serious. This wasn’t.

My shift was up around 2. Time to go grab something to eat. Back at the house I grabbed some food and put another post up on Facebook. Some people texted me that they’d voted for me. “Thank-you for your support!” was my reply back.

I chuckled to myself. This was cliche. That’s what candidates are supposed to say. It was almost funny. But it was true. I did appreciate their support. There were no party labels attached. This was a simple question: “Do you think that I will do a good job representing you?” They were answering “Yes.”

I dropped by the local campaign headquarters for my client. People were on the phone. Some of them asked me about my Facebook post. Word was getting out. They asked if I was joking. I said no. They were thrilled. They said they were definitely going to vote for me. “Thank-you for your support,” I said. We all laughed. We all knew how candidates were supposed to act. I had it down.

I went over to my home precinct around 4pm so that I could take over the campaign literature duties until the polls closed. I went in to vote and wrote in my name and the name of my friend that had started all of this with his phone call. I figured it was the only fair thing to do. Turn about is fair play. Or payback. Whichever you want to call it.

More friends texted that they’d seen my Facebook post and had voted for me. Perhaps I wasn’t so crazy after all. People started coming to the precinct that I knew. I asked them to write me in. They said they would.

The sun started to go down. More people came that I knew.

Most importantly, most of the people coming were coming to vote for my client. It was critical that he win. Control of the state senate depended on it.

More people came that I knew.

One of my former HS wrestlers came in that I had coached a few years ago. He said he was definitely voting for me. His parents came in a few minutes later. They both were excited about voting for me after I told them what was going down.

The polls were closing. It was time to pick up the signs at the precinct and head to the campaign’s “Thank-You” party an hour away. My client doesn’t believe in “Victory” parties. They can be highly presumptuous. He believes in “Thank-You” parties. That’s just the kind of person that he is.

By the time I got to the event the drama was pretty much over. No need to watch election returns come in for his race. Despite being outspent more than 2-1, he won by 17%. Mission Accomplished. Now the question was, would his campaign go 2-0 that night?

A few days went by. Apparently the threshold for winning a write in campaign is a minimum of 25 votes. So no, 18 votes wouldn’t win me the spot. Turns out I got 31 votes for my legal name. 9 votes for my nickname. I was declared a winner. Coming in second in the write-ins was Robert E. Lee. (That was the name of the district) No one had ever won by write-in before. Ever. Not in the 200+ year history of my city.

It must be the most efficient political campaign in history.

The news did a story on it.

They thought it was pretty crazy too. 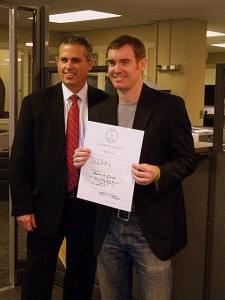