So I was watching the Daytona 500 tonight with my buddy D. We’re both Dale Jr. fans. [Yes, we understand we’re probably cursed to suffer through another season of near misses. It doesn’t matter. We’re die hard fans to the bitter – usually – end] 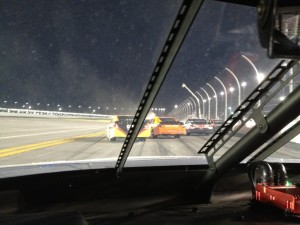 Yes, he took his iPhone with him into his race car. Little did he realize that the REAL firestorm was about to be ignited by that photo. What happened next almost defies belief.

To set the stage, Fox has done a fantastic job of integrating social media – specifically Twitter – into their broadcasts. They put the Twitter handles of the commentators up at every opportunity to help engage the audience. Whoever came up with that idea deserves a raise and a BIG bonus. But I digress…

When Keselowski tweeted that photo, he had somewhere in the neighborhood of 64.5k followers.

To put that in perspective, Keselowski has TRIPLED his Twitter following. As I type this, he is about to break the 200k follower mark.

With one tweet, Brad Keselowski has tripled his personal reach for his sponsors. He’s just commanded a much larger media share and contract value for himself. The end result may have been inadvertent, but three things are for certain:

Using social media isn’t simply a matter of chance. Social media is something that every company can (and should) be taking advantage of. Many decisions makers know they should be using social media, but because they aren’t sure what they should do with it, they throw a Facebook page up, might create a Twitter account, usually don’t have a YouTube channel and simply hope to “get lucky” and that it somehow benefits their business. My belief is that true luck is where preparation meets opportunity. Opportunities abound – as evidenced by Brad Keselowski’s photo. It would be wise to make like a boyscout and “Be Prepared.”